iFi's most popular and affordable DAC/headphone amp just got even better.

Designed for home use – on a desk or in the living room – the ZEN DAC V2 connects to PCs, Macs, tablets, and phones via USB. Its hi-res digital-to-analogue conversion technology processes all forms of digital audio to a high standard, while the simple integrated headphone amplifier delivers the sound to your headphones, from in-ear monitors to larger over-ear designs.

New in V2: Smooth and balanced.
A new and improved low jitter, crystal clock means >20dB better performance. The super-low noise performance helps the ZEN DAC V2 remain quiet even in highly noisy environments such as yachts or RVs.
The ZEN DAC V2 still features Pentaconn 4.4mm balanced outputs at both the front and back. On the front, there’s also the popular 6.3mm headphone socket. 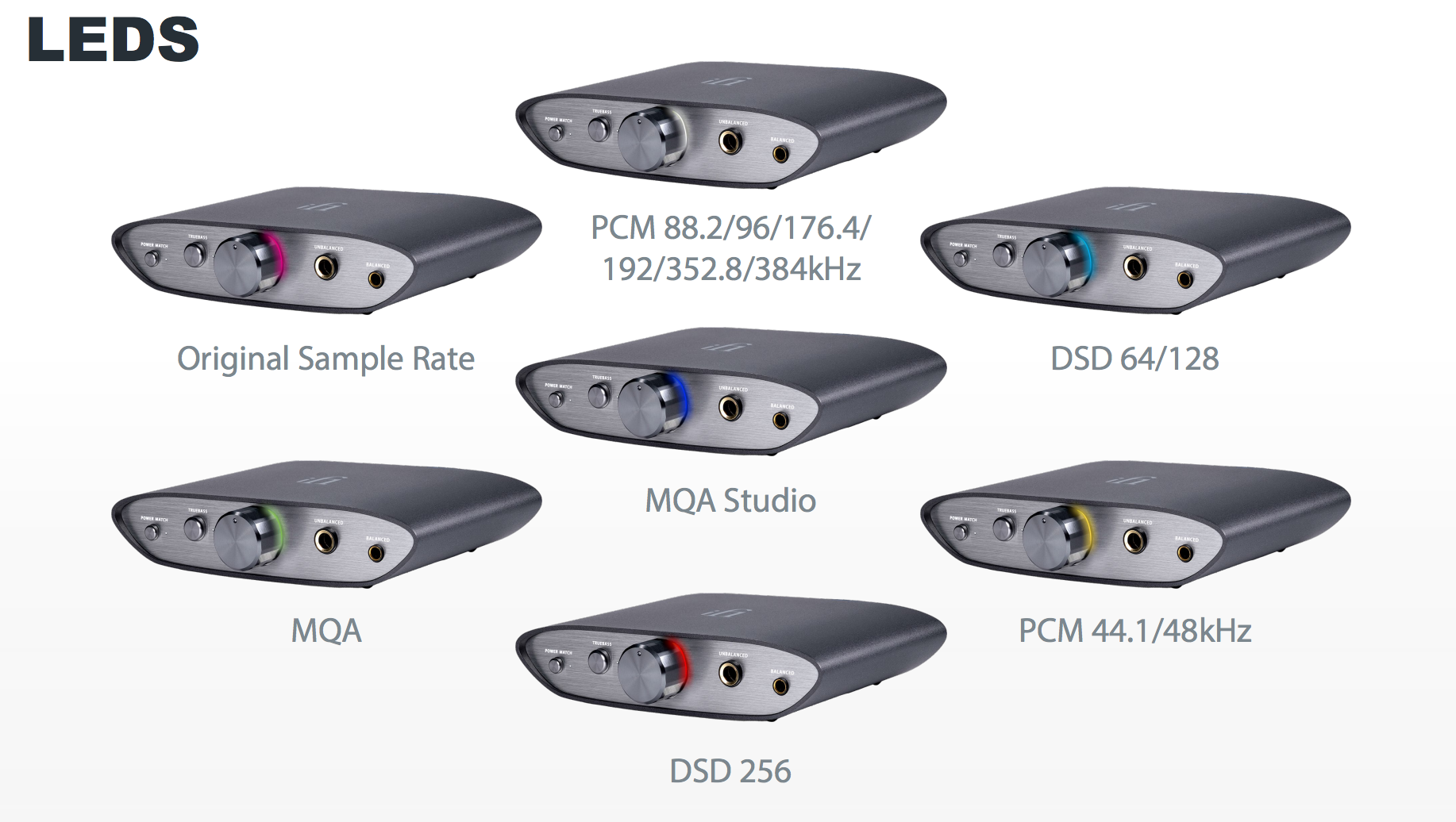 The DAC section is based around a Burr-Brown DAC chip, selected for its fluid, highly musical sound quality and ‘True Native’ architecture.

This, together with the new 16-core XMOS chip used for input processing, enables the delivery of excellent sound across all manner of digital audio formats including hi-res PCM, ‘bit-perfect’ DSD and MQA decoding ­– the hi-res streaming codec, as used by Tidal’s ‘Masters’ tier. The ZEN DAC V2's digital audio credentials are highly impressive for a product in this price range.

Thanks to the Burr-Brown chip’s True Native design, PCM and DSD take separate pathways – this enables DSD to remain ‘bit-perfect’ in its native form, right through to analogue conversion. Many DACs that claim DSD compatibility accept DSD data but then convert it to PCM. For DSD purists, the ZEN DAC V2 is a fantastic affordable solution.

Extensive clock-locking is used throughout the digital stage to eradicate jitter, maintaining the integrity of the digital signal until conversion.

The ZEN DAC V2's analogue stage is a balanced design – not often found in a combination DAC/headphone amp at this price point. It incorporates a range of quality circuit components, carefully selected for their performance in an audio context, including C0G capacitors from TDK and an analogue volume pot.

The headphone amp stage has switchable gain, which we call PowerMatch. This matches the level of drive to the load presented by the headphones, by adjusting input sensitivity and thereby signal strength. With high-sensitivity headphone types such as in-ear monitors, leave PowerMatch at its lower setting for ultra low-noise performance. But if your headphones require more drive – most on/over-ear types, for example – press the PowerMatch button on the front panel to increase gain.

TrueBass is another user-selectable feature. An evolution of our established XBass circuit, TrueBass is a sophisticated form of ‘bass boost’ that subtly enhances low frequencies without muddying the midrange – particularly useful with earphones and open-back headphones that may lack deep bass. It operates entirely in the analogue domain rather than messing with the digital signal via DSP and may be switched in or out via another button on the front panel.

The ZEN DAC V2 sports Pentaconn 4.4mm balanced outputs, both front and back, designed to enable balanced signal transfer between compact products that cannot accommodate traditional XLR connections. The front-mounted 4.4mm output sits alongside a standard, single-ended 6.3mm headphone socket — which can accommodate the included 6.3mm to 3.5mm adapter — thus, the benefits of balanced headphone designs are fully utilized, whilst also accommodating every type of headphone, both balanced and single-ended.

The 4.4mm output to the rear enables connection to amps and active speakers equipped with a balanced input – either a Pentaconn 4.4mm input, or XLR inputs via a 4.4mm-to-XLR cable. Single-ended RCA outputs are also provided.

For example, our favourite option for upgraded headphone performance — the ZEN CAN analogue headphone amplifier — can connect via RCA, or use iFi’s 4.4mm to 4.4mm interconnect cable for superior balanced performance.

These line-level outputs – both balanced and single-ended – can be switched between ‘variable’ and ‘fixed’, enhancing the ZEN DAC’s versatility. The variable setting applies volume control to the audio signal, enabling the ZEN DAC to perform as a preamp feeding a power amp or active speakers. The fixed option bypasses the volume control, fixing the output at 4.2V (balanced) or 2.1V (single-ended) for connection to an external preamp or integrated amp.

The ZEN DAC’ V2's asynchronous USB Type B input supports the ‘SuperSpeed’ USB 3.0 standard and is also compatible with USB 2.0. "it offers a lot of features at an entry-level price, and I found that when it is mated with other high-performance components the end result can be reference- or near-reference-level sound" read the review

"The midrange purity and delicacy of this system reminded me of the kind of seductive presentation I usually associate with a single-ended tube amplifier, but without any of the background noise or low-level hum. It didn’t matter whether it was a male or female vocalist; the absence of grain and electronic texture was entrancing"

Audiofi is your iFi Zen Dac dealer in Vancouver, we ship free in Canada